Joe was exploring a sale with a practice management company.

In both cases, they could not get what they needed – until they turned to ADA Practice Transitions.

“I was expecting to have to look for close to a year to find something I really wanted,” Kristen says. When she began working with ADAPT, she got the resources she needed, including a dedicated ADA Advisor who served as a “sounding board” while making the whole process “more focused and relevant.”

“ADAPT made all the stress of trying to find a new position kind of stress free!” Kristen says.

Joe heartily agrees: “The ADAPT process was much smoother, much more transparent, much more on top of communication and feedback,” he says. “They are doing dentistry a big favor by allowing a better mechanism for people to move to a new practice.”

Today we’re sharing the story of how ADA Practice Transitions helped Joe sell his practice to Kristen, who will care for his long-term patients for years to come.

Kristen grew up in rural Maine and attended the University of New England College of Dental Medicine in Portland. As she entered her final year of school, she started to get serious about her next steps.

She knew she wanted to return to a small town rather than remain in Portland. And while she took some business classes, “They weren’t comprehensive.” She wanted a mentor who could help her learn the business side of dentistry while she sharpened her skills.

At the same time, she wanted to find a place where she and her family – including two children – could put down roots. But most important, she says, “I wanted to find a practice and a provider who meshed with how I want to practice.”

She learned about ADA Practice Transitions at a UNE event and signed up for the pilot program. Creating the profile was easy, since she already had most of the necessary information on her CV.

Joe’s Mission: Find a buyer to care for long-term patients

Meanwhile, in Lincoln, Maine (population 5,200), Joe was starting to think about slowing down and eventually selling his general dentistry practice. He spoke with a few practice management companies and brokers, and they all warned him it would take 3 to 5 years to find someone interested in a small-town practice. He signed up with one to see if he could find a potential buyer.

However, even after a couple of years, he had made no progress. “The big companies, you pay a big chunk of money off the bat just to get the process started,” Joe says. “That’s difficult to swallow. I don’t think I got my money’s worth – I did not get one hit, and I had to contact the company or else I did not hear from them.”

Then Joe heard about ADAPT through the Maine Dental Association. He was intrigued by ADAPT’s focus on finding the right person for a practice rather than merely trying to match dentists by location and budget. He spent a couple days completing his profile to showcase his practice and preferences, then hit “submit.”

Just a few days later, Joe met his ADA Advisor, Dr. Suzanne Ebert, at a Maine Dental Association event. They talked dentist-to-dentist about his small-town general dentistry practice, his goals, and his interests. Joe wanted to find the right person to take over the practice he had spent decades building, and was willing to mentor someone into the role.

Within a month, Dr. Ebert had sent Joe a couple of potential matches. The first was not interested, but the second one was a D4 at UNE: Kristen.

Dr. Ebert recommended they keep the first phone call short, just 15 minutes to make sure they were on the same page. Instead, the two hit it off right away and spent an hour and 15 minutes discussing the practice.

After two weeks’ worth of additional phone calls, Kristen brought her family to visit Lincoln and the practice. Joe and his wife, Julie, took the family for a boat ride on one of Lincoln’s lakes, roasted marshmallows with the kids, and helped the family get a sense for the area.

Meeting with Joe’s family was “eye-opening,” Kristen says. “We really meshed from the start, and it felt very easy.” She felt they share similar personalities, and she could see herself working in the practice. “Personalities vary significantly, as well as ideas on how to practice,” she explains. “ADAPT isn’t just matching you with an area. It’s matching you with a person, a practice, and a mindset, so you’re not going into a situation where you and your potential boss or coworker don’t mesh.”

Kristen and her husband, Brian, wanted to ensure that a move would be positive for the entire family. So while Kristen and Joe discussed the practice, Brian and Julie talked about local schools and how the family could get involved in the community. Brian also explored the local job market.

The visit was a success. The kids even started asking when they could move.

Joe felt the same way, noting, “From the outset, everyone seemed to think this was too good to be true.”

Next, Kristen came to shadow Joe at the office. She clicked with the office staff too, and patients seemed to like her.

In a twist on a traditional working interview, Joe himself needed a new crown and asked Kristen to prep it. “It was textbook perfect, and painless,” Joe says with a smile.

The pair’s goals align nicely. Joe isn’t quite ready to retire but wants to begin a transition to ensure his patients are cared for. Kristen isn’t ready to take on the full responsibility of practice ownership, but wants a mentor who can help her get there.

By working with their ADA Advisor, the two came to an agreement: Kristen will work as an associate for three years before purchasing the practice. This gives Kristen time to learn from Joe – both dentistry and business – and gain confidence in her skills. Meanwhile, Joe can begin to reduce his own hours and spend more time with family while knowing the practice is in good hands.

Why small-town dentistry is so appealing

“Small-town dentistry is the best-kept secret in dentistry,” Joe explains. Even in a town like Lincoln with a couple other dentists, there’s not much competition and patients tend to stay loyal. “You get to know your patients. They even become like family,” Joe says.

That sense of knowing your neighbors extends beyond the dental office, and it’s why Kristen was determined to find a small-town practice with a sense of community. She wants to settle in a place where she can know her neighbors, without being able to reach out and touch their houses from her window.

Small-market dentistry can provide more opportunity than practicing in an area with lots of specialists. After all, as Joe explains, “People don’t like to travel an hour if they don’t have to.” That’s why he provides “bread and butter” restorative treatments, but also offers many services that would be referred out in bigger cities, such as root canals, orthodontics, and extractions. This can be very appealing for a dentist who prefers a variety of work. Kristen is attracted to this combination and is especially eager to learn orthodontics from Joe.

Plus, with no need to advertise and overhead that’s much lower than in cities, small-market dentistry can be very lucrative. (See how another dentist turned a short-term small-market contract into a satisfying career.)

Despite the coronavirus pandemic, life is moving on for both sides. Kristen is busy finishing dental school while preparing to move her family to Lincoln. She will take her licensing test as soon as the testing centers re-open.

Kristen says it was her “wildest dream” to find such an ideal match so early in her career, and she can’t wait to get started.

Meanwhile, Joe is getting ready to officially welcome Kristen into the practice. He is glad he trusted ADA Practice Transitions, saying, “The process seemed to make great sense, and I would highly recommend the way it’s worked for me and Kristen.

Find out how ADA Practice Transitions can help you buy or sell a practice of your own, or create your own free profile to get started!

See more Transition Tales from dentists who have navigated their own career changes!

Watch: Bringing Together Two Dentists for Mentorship and Growth

Dr. Gagnon needed another dentist in her practice after her father retired. Dr. Sikora wanted her first associateship out of dental school to include plenty of hands-on mentorship – in a state where she had no connections.

Matched: Finding the Perfect Associateship in a New State

Dr. Jessica Sikora had never been to Maine until 2016 when she visited and interviewed at the University of New England College of Dental Medicine.

“I immediately fell in love with the area,” said the Honesdale, Pennsylvania, native.

She’d also fallen in love, after four years of dental school, with the idea of practicing in her new state.

Transition Tale: Finding a Second Practice with a Similar Philosophy 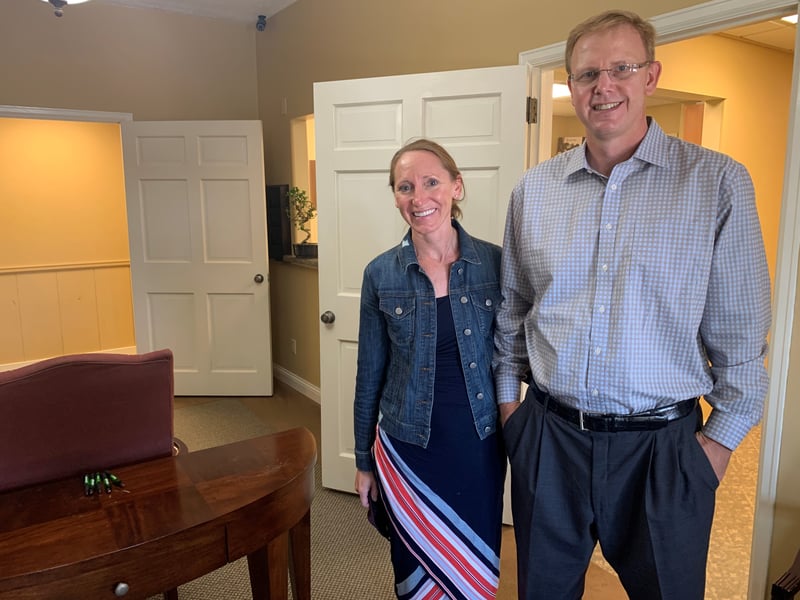 Drs. Bob and Heather Heil owned two successful Wisconsin practices. After a tragic fire destroyed one of their practices, they began looking for another to help meet their personal financial goals. Despite years of searching and working with brokers, they didn’t find just the right place until Dr. Bob joined ADAPT.